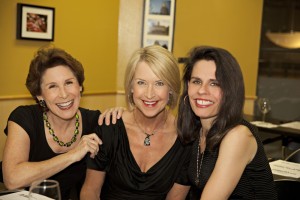 Beth Ullman, Mady Kaye and Dianne Donovan are the ebullient Beat Divas. Three remarkable voices in tight harmony romp through American jazz and pop with a joie de vivre and vocal abandon rarely heard. Sexy, sassy and swingin’, their repertoire includes original works, jazz standards and the best of American pop music jazzed up. From bebop to pop-gone-salsa, the song styling is totally refreshing. The Divas’ songs about food, which they include in their cooking classes, are delicious and hilarious.

Each singer has a successful solo performing career. Beth and Mady are teachers of voice. Dianne has a background in jazz radio and is an esteemed classical radio host. The three friends bring their expertise and diverse musical influences together as the Beat Divas. The blend is uncanny. The arrangements are exquisite. Pure delight for the ears!

The Beat Divas got started quite by accident.  In 1999 Beth and Mady were involved with a group of jazz musicians putting together a music cooperative. The co-op’s purpose was to start gigs at an earlier hour of the evening and play in non-smoking venues.  Mady and Beth performed at the co-op’s fundraising concert, and with friend Suzi Stern sang two songs that Mady arranged for the trio.  The audience went nuts! The Beat Divas were born! Suzi later left the trio to pursue her own career, and Dianne Donovan joined the Divas, giving the group what they had always needed: a true alto voice. Dianne and Mady and Beth have been performing together since 2001.

A typical Beat Divas rehearsal has always focused on food: “We start by talking about what we cooked, what new dish we plan to serve, a new food we’re incorporating into a meal, a new recipe we read about or saw on the food network, a new restaurant we visited. We’re passionate about food. Sure, we get around to rehearsing, but not before we talk about food. And so we parlayed our food passion into our cooking classes at Central Market Cooking School in Austin, and at the Lake Austin Spa. At first we sang food songs written by other people.  But we’re songwriters as well as singers, so we figured we’d write our own songs about food. Make it a lot more personal. Sometimes a recipe inspires the song. Sometimes the song brings about the recipe. In any case, it’s a delicious pairing.  We debuted our food songs CD in June of 2011 at the International Association of Culinary Professionals conference, held in Austin for the first time.  We performed live with our  wonderful band (all dressed in Beat Divas aprons), to a most enthusiastic reception.  And this before 9 a.m.”

The Beat Divas have grand plans for a cookbook of their many recipes, maybe their own cooking show – always with music – and travel to other cooking schools to present their music and menus.  “After ten years together, we feel as if we’re just hitting our stride. As they say in Texas: bon appétit y’all.”