Group Blends Music and Food in a Town That Reveres Both

THE NEW YORK TIMES
6/22/11
Out Here | Austin, Tex.
Group Blends Music and Food in a Town That Reveres Both
By KIM SEVERSON

This town likes to brag about a couple of things. One is an abundance of music, as manifested by statues of guitars set along the main drag and live bands playing every night of the week. 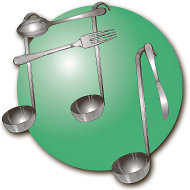 The other is Whole Foods, which was born here and whose flagship store is so big that one longs for a global positioning device just to buy some (organic) milk.
So it only makes sense that Austin would produce the Beat Divas, three ladies in their 50s and 60s who make a living singing original songs like “Hog Fat” and “Tomato Blues” as a warm-up for their cooking classes. The three — Mady Kaye, Beth Ullman and Dianne Donovan — began as a respectable jazz trio that spent a lot of rehearsal time talking food. In 2004, they started teaching cooking classes at Central Market.  Someone suggested starting the classes with a song Ms. Kaye had written in support of eating a little bit of chocolate every day. They mixed in some other food standards, like “Frim Fram Sauce” by Nat King Cole. Of all their tunes, perhaps “Better Not Drink the Water” is a favorite. It combines an environmental message with the suggestion that drinking wine is a much better option. One thing led to another, and now they play food conferences and other events around town. Recently, that included an early morning gig at the International Association of Culinary Professionals. They looked a lot like the nutritionists and cooking teachers that peppered the audience. They sounded a little like the Andrews Sisters. And they were perkier than anyone has a right to be at 8 a.m. in Austin. With a guitarist who plays regularly with Lyle Lovett (and is married to Ms. Donovan), a drummer, a piano player and an upright bass, the Beat Divas woke up even the most hung-over culinarians. “I was impressed with how attentive they were,” Ms. Kaye said. “They applauded even at some of the solos.”